Conservatories have, for a long time, been a popular way of adding an extension to a property. However, over recent years, orangeries have become increasingly sought after. This article discusses the differences, advantages and disadvantages of both.

What is the difference between a conservatory and an orangery?
Although orangeries have seen a resurgence in popularity, traditionally, an orangery would be found in expensive seventeenth and nineteenth century luxury architecture. The building was traditionally used to promote the growth of citrus trees during the winter seasons, as well as other large plants that would have been killed during the winter season. Therefore, one of the main differences between an orangery and a conservatory is that an orangery is often regarded as a larger and more permanent fixture. Due to the necessity to retain heat, orangeries often have more brickwork than a conservatory, although both are designed to allow a great deal of natural light into the room. Both have their advantages and disadvantages and whether you choose an orangery or a conservatory really depends on how you want it to compliment your home.

Installation
Both an orangery and a conservatory can add a great deal of value to your home. In theory, a conservatory is simpler and cheaper to install than an orangery. This is because it does not require brickwork or a particularly robust structure. However, an orangery usually lasts longer and is often regarded as an extra living space that can be used all year round.

Warmth
Orangeries are generally designed to retain more heat than conservatories. However, with double glazing and modern heating, both orangeries and conservatories can kept warm. In both cases, it is often a good idea to have a good set of double doors that allow the area to be closed off during the cold winter months. 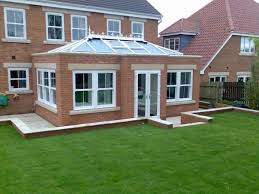 Function
Very few people actually use orangeries to grow fruit trees anymore, however, the extra warmth and large area makes them an ideal space for an extra room in the house. An orangery can often double up as an alternative living room or dining room, to be enjoyed during the summer months or when the sun is shining. People tend to think of an orangery as an extension to the living area within a home, a space that is full of natural light and is usable all year round. Alternatively, a conservatory is often thought of as a transitional space between the house and the garden. The wide open views within a conservatory are often a tempting draw to go and stare out at the garden all year round. Both orangeries and conservatories provide a great compliment to a home. The natural light and the plants that grow within them contribute a fantastic ambience within a home, making it a more relaxing and healthy space to occupy. Furthermore, luxury extensions and conservatory and orangery designs are available in a wide range of designs that compliment both modern and tradtional architecture.

About Andy: Jonathon Hughes has been offering architectural and home improvements advice for over fifteen years. Jonathon specialises in extensions and regularly writes about the range of designs available in the modern market place for a range of online and printed media. Visit this page to find out more.