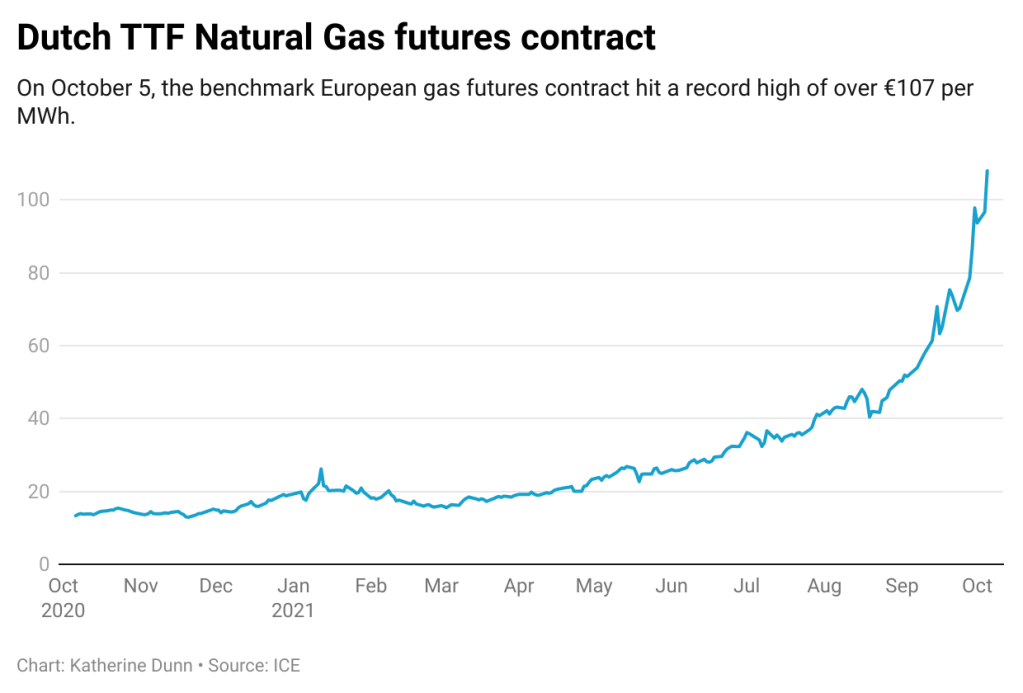 Sometime in September 2021, when winter was around the corner in the northern hemisphere, storehouses of natural gas in Europe were low in supply, sparking concerns in many countries. Although winter normally pushes up gas prices all over the world, last year’s lull had some in panic mode. “If the winter is actually cold, my concern is we will not have enough gas for use in heating parts of Europe”, said Amos Hochstein of the US State Department. Gas pipelines from Russia and Norway didn’t seem to be able to meet the demand, and the continent’s nuclear plants were slowly being retired. As to wind power, the weather was calm, so that wind farms were not producing as much power as hoped. All this pointed to a heightened demand for natural gas, which not only heats homes, but also powers industries.

Between January and September 2021, natural gas prices had increased by a staggering 500%. In Asia, green energy goals were compromised by the high gas prices, as some importers brought in fuels like coal, which emits about double the carbon dioxide as natural gas. Chinese industries began receiving rationed electricity to stay in production while in the USA, where natural gas prices were less expensive than in Asia and Europe, they were still the highest since 2014. “This winter, the world is likely to learn how much the global economy depends on natural gas”, reported Bloomberg. Meanwhile, south of the equator, Brazil’s Parana River Basin was at its lowest levels in decades due to a drought, limiting the region’s hydropower and spurring Brazil to turn to natural gas. Let’s take a look at what might be next for natural gas trading prices as 2022 pushes on.

In the first week of December, analysts from Inspired Energy claimed “Europe remains in the throes of an energy crisis”. Russia’s gas exporter, Gazprom, claimed to have been delivering scheduled quantities, but they were not contributing to the spot gas market. Frustratingly, the natural gas pipeline from Russia to Germany called Nord Stream was not yet in action due to political red tape. By the end of the month, Nord Stream was still paralyzed and cold weather was expected, which pushed the price of US natural gas futures up by 4%. High gas prices, together with strong demand and low supply, made it possible for natural gas companies like NG Energy International Corp, Baytex Energy Corp, and Camber Energy to offer their shareholders substantial gains.

As things turned out in early winter, temperatures in the Northern Hemisphere were, on average, 1.86 degrees Celsius higher than normal. The demand for heating gas was much below expected, so that gas storages lasted unusually long throughout November and December. High gas prices also made a difference, leading to a preference for coal-fired power, so the chances of gas supplies lasting through winter seemed a lot better. Eurasia also found itself in surprisingly warm conditions, which softened demand for US gas and coal.

Brazil has relied for many years on the power produced by its Parana River, producing 60% of its electricity through water movement, but the recent drought is the worst in 91 years. As October drew to a close, Brazil had to import gas from Uruguay and Argentina to make it through to the rainy season, when water levels would otherwise rise. This, in turn, increased pressure on Argentine supplies, since neighbouring Chile also brings in gas from Argentina. Raised energy prices were not a welcome prospect for South Americans trying to pay increased grocery and electric bills, and recovering, in general, from the economic effects of Covid. All this threatened to draw voters away from President Jair Bolsonaro in the upcoming elections in 2022. “There could be a populist race to the bottom”, remarked Schreiner Park of Rystad Energy.

Colombia, by contrast, enjoyed a good amount of rainfall, filling their dams to 86% of their capacity. Analysts were concerned about the rainy season coming later than it was needed in the southern areas of the continent, which could lead to more drought. “This is my biggest concern”, said Gabriel Dufflis of Wood Mackenzie. “If that happens, we will start the 2022 dry period in bad shape”. Also in the USA, it was expected that dry weather would keep US hydropower outputs down by 14%, compared with 2020.

Those involved in CFD trading ought to keep an eye on natural gas prices, as their fluctuations present traders with opportunities as well as risks. CFD traders invest in the share price movements of various commodities—including natural gas—as well as sectors, industries, forex and companies, without the need to own the underlying asset. Essentially, CFD trading relies on volatility, and with three more months of winter in one hemisphere and a drought in another, the next few months may be fraught with uncertainty, so stay tuned to the financial news for crucial insight.