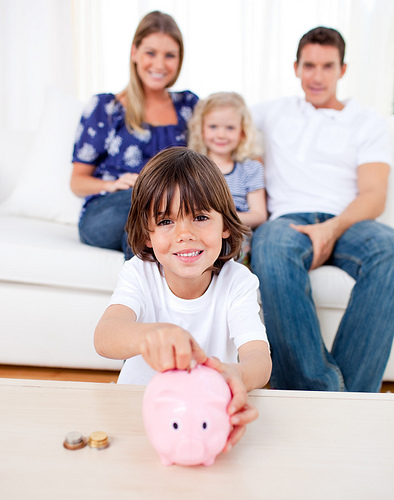 Teaching kids about money is one of the hardest things a parent will ever do. There's no rigorous classroom instruction about how to budget, invest, or save money. High schools, and even colleges, don't even teach people how to be entrepreneurial.

The burden of teaching money management skills falls squarely on the shoulders of parents. That means your kids are depending on you. If you think you do a pretty good job of managing your own financial affairs, the job might be pretty easy. Just teach by example. What if you're having financial troubles due to the economy? What if you're doing well financially, but don't have a clue as to how to bestow your accumulated wisdom?

What You Can Learn From Donny Deutsch

The Big Idea with Donny Deutsch was a TV show that aired on CNBC many years ago. It was canceled in 2008, but it was one of the best shows to ever hit that station. It featured entrepreneurs trying to live the American dream. These people would come on TV, be interviewed by Deutsch and a panel, and sometimes the entrepreneurs would receive help from venture capitalists that were connected to the show. There was an episode once that featured kids and money, and if you missed it then you missed out on one of the best life lessons to ever be filmed on TV.

He was right. This kid essentially started his own business and therein lies the secret. The kid had to learn how to not only manage money, but time. He had to keep his responsibilities to his customers. The father of this child helped him do that. He taught him basic principles about business, money, and savings in terms the kid could understand.

The child took it from there. Much of the learning seemed like it was self-directed. There are some books out there about teaching kids about money, but there's no substitute for action. You can read a child a book, but you can't be sure he really "gets it." If you ask your children to actually manage money you (or someone else) gives them, you'll know how well they are able to do it.

Now, you don't have to push your kid into starting a dog-walking business. Not all children like walking dogs. However, you should be able to teach your kids principles of managing money in other ways. Paying your children for chores is one way.

By paying for chores, you teach the child the value of doing work. The pay can vary according to the chores that are being done. For example, doing the dishes may earn your child one pay rate, while vacuuming earns her another rate. You could also pay according to how well the job was done.

Whatever you do, make sure that you are consistent with your pricing. The worst thing you can do to a child when teaching her about money is to be inconsistent with how you pay her, or making the rules for payment unclear or arbitrary. The only thing this will teach the child is that life is filled with arbitrary and unfair rules. The reality is that most businesses don't treat their employees unfairly. If they did, the employees would leave. Your child can't leave your home (unless he has reached the age of majority).

So, write down the rules. Make sure you "publish" them on the fridge or somewhere where your child can read them (or at least see them). Make them simple to understand, and read them to your child. Get your child's consent and encourage them to follow the rules and do a good job. This gets them engaged in the whole process of doing chores for money. Also, make it clear that if the chores aren't done, that no payment will be made. You can establish other punishments like "wage garnishments" for work that your child promises to do but doesn't do or doesn't complete properly.

The important thing is that if you are fair with your child, you will also be teaching your child to be fair with other people - perhaps without even realizing it. If this sounds a little too grown up for a 6 year old, don't worry about it. Your children will probably love it.

Teaching Your Child About Spending And Saving

Once you have the basics of "work for pay" down, it's time to teach your children about values and efficiency. Being money savvy means getting good deals on most of what you buy, saving a good portion of what you do earn, and not wasting money on frivolous things

The problems is that most parents try to dictate to kids what they should and shouldn't spend their money on. Kids have different priorities than parents. They also have different values. You have to recognize and appreciate that. You can't force a child to think about what will happen 3 years from now if he buys a pack of chewing gum. She might not care about what happens 3 years from now.

Instead, what you can do is try to encourage the principle of long-range thinking. Three years is a bit too long for many children to fully grasp. Instead, think in terms of weeks. When your child wants to spend his money, give him options within a defined context. As a parent, you don't have to let the child have complete freedom of choice. In fact, this could be disastrous for both you and your child.

Give your kid a choice of maybe 3 or 4 options. Some options should give the child immediate gratification. Other options should be much more rewarding for the child but should require the kid to put in some "wait time."

For example, if you know your child loves candy, but he also loves going rollerblading, offer him two choices: candy and rollerblading. Set the rollerblading trip up so that he has to wait a week or maybe even two weeks before he can go. You could even offer a bonus like rollerblading and a free meal afterward The child pays for rollerblading, and you'll buy the lunch or dinner after.

Realize that the child might sometimes choose the immediate gratification over the long-term option. It's going to happen. However, if you can create a huge value contrast between the short-term and long-term options, your child should start to understand the benefit of thinking long-term. That's important.

Teaching your child about saving and investing is simple. Instead of the long-term offer being rollerblading, offer to give your child additional money. If your child earned a dollar for chores, offer to pay interest on the money if your child chooses not to spend it. There has to be an incentive of some kind to save rather than to spend. You could even explain that, if she waits, she could buy more candy in the future than she can right now.

While it's important to be consistent, you also have to be flexible. As the child gets older, the pay may increase. At a certain age, the child will be ready to transition to a new job. The spending options should increase and increasing authority should be given to the child. You'll also need to give your kid better explanations of how investments work as they get older. Consider hiring a financial planner to do this if you find that you just don't understand some of this stuff yourself. Eventually, your child will "take the reigns" and will probably become self-motivated without you having to do much work at all. You might even be surprised at just how savvy your child becomes.