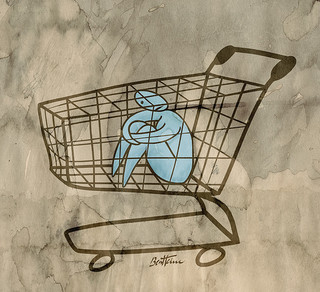 If you circle your own wagons, it's hard to become a shopoholic. If you're not a shopaholic, you can't be a spendaholic. Right? When you go on an information diet, put down the paper, throw away the catalogs you get in the mail, and lock your credit card a safe in the basement, you're totally insulated from the urge to spend. At least, this is what many financial experts believe.

On the other end of the spectrum, you have psychologists who have convinced laypeople that addictive personality is a disorder or a disease. As an extension, some experts believe that an addiction to spending money is an illness. If that sounds a little far-fetched, it is but it doesn't stop doctors from prescribing medication for it. Even the name "spendaholic" is a spun version of "alcoholism."

You don't need medication to stop spending money. You aren't sick, and it's not a disease. You just need to change your spending habits and the way you look at money.

Signs That You're Addicted To Spending

The signs are pretty easy to spot. You probably already know if you're a spendaholic of not. Do you feel an intense desire to buy "stuff" when you don't really need to? Are you an impulse buyer? Do you get a emotional "high" from spending money? Does it fill some kind of psychological need in your life? If you answered yes to any of these questions, then it's likely that you have an addiction to spending money. So, what do you do about it?

Lessons From The Hadza

The Hadza are one of the last hunter-gatherer tribes left in the world. They don't have any property to speak of, and they're nomadic. That has its advantages and disadvantages. One of the advantages of being a hunter-gatherer is that you don't have to worry about "stuff." If you don't have anything to lose, it's pretty easy to pack up your things and move on, and that's exactly what the Hadza have to do when they've hunted an area to extinction or exhaustion

You could hardly describe the Hadza as "spendaholics." Is it because they have no Earthly possessions?  Is there something about being indigenous people that makes it easy to resist shopping? It sure helps that there are no shopping centers in the African wilderness, but it doesn't have anything to do with the simple life they lead.

When hunter-gatherer tribes come into contact with western cultures, they often adopt western ways, and consequently also adopt many western habits (for good or for ill). It makes sense. After all, your ancestral lines can be traced back to hunter-gatherer tribes, but that fact alone doesn't force you to adopt a simple lifestyle. It also doesn't keep you from blowing your entire paycheck at the mall every weekend.

There's something different about the Hadza, and it's not very easy to pinpoint. The difference is purpose. If you watch any of the videos available online, or are fortunate enough to actually travel to Africa, you can see how these people actually live. When you're a hunter-gatherer, you have to be focused on survival.

While "survival" might sound concrete-bound, it's not. The Hadza spend most of the day hunting, but they also spend much of the day relaxing. In fact, relaxation is part of living and is part of a uniquely human psychological need. The Hadza have to wake up every morning figuring out what they will eat for the day, and then they relax and get ready for the next day.

This sense of purpose is lost on many people living in modern society, because a sense of purpose isn't something that is widely discussed - especially in the context of personal finance. It's something you might have to learn or relearn in order to quit being a "spendaholic."

If you're a spendaholic, chances are you don't have any sense of purpose in life and thus you have no reason to own the things that you own. You just buy them largely based on an emotional "need." That might sound very esoteric, but it's not. Look around your home. Why do you have the things you have? This is going to require at least a basic level of honesty on your part. Can you write down, in specific detail, how each of these things contributes to your life? If you can't, or you don't know why you purchased something, then sell it. Before you do, try to find similar items in your home that are related to the thing that has to reason for existing in your home.

Once you've gathered up all of the purposeless items in your home, and figured out why you purchased them, it's time to purge them from your life. This is what takes honesty. If you aren't willing to admit that there are things in your home that have no reason for being there, then there's no way to stop being a spendaholic.

Focus on your own survival. That doesn't mean you have to live like the Hadza. It means you have to find some purpose in life and pursue it. Focus on your top five or six values in life and make purchases connected to those things. This naturally limits your ability to spend frivolously on things that don't matter to you or aren't benefiting your life in some way.

You don't have to justify your spending habits to other people. It's none of their business. However, it is your business and this point cannot be stressed enough. You must define a specific reason for buying stuff. Any purchase you make has to have purpose. It has to have a reason, and not just any reason.

Does it contribute to your happiness in some way? If so, how and why? The more you have to justify something, and the more detail you put into your justification for purchases, the less you will buy. Try it. Don't rationalize your purchases by making up reasons out of thin air. Connect them to your top value in life. Make an effort to legitimately explain, to yourself, why you're buying whatever you're buying. It doesn't matter if it's food, clothing, or anything else.

As yourself questions like "what happens if I do not buy this item?" and "can I get similar quality at a cheaper cost?" The first question is especially important. Try to think about what your life would be like if you put that dress back on the rack or bought the generic brand of food or stayed in to eat instead of ordering pizza. How much better or worse would it be if you put away your credit card, or debit card, and just didn't buy anything at the mall this weekend?

Sometimes, you'll find that you really do need a new pair of shoes. However, there will be many times when you'll discover that you really don't need whatever it is that you're buying. Regardless, if you have a purpose for whatever it is you're buying, you'll find that it's easier to change your spending habits. It will feel more natural. You won't feel like you're "giving up" something. Instead, you'll feel like you're "getting rid of" the unnecessary.